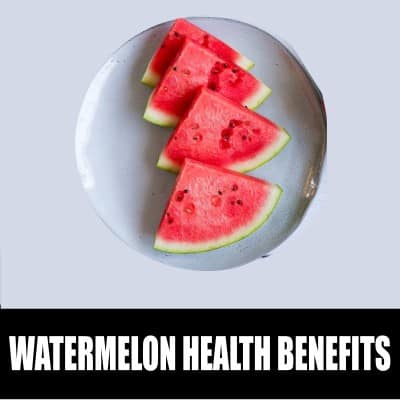 Nothing indicates summertime better than fresh watermelon being sold in the fruit bazaar on a warm day. Apart from being delicious,

watermelon also has countless health benefits. The best part about these fruits is that everyone can benefit from it equally. Be it heightened recovery from work out sessions or preventing cancer cell growth; there are loads of health benefits that this sweet and juicy fruit provides. However, there are certain doubts about over consuming watermelon. Do watermelons have any negative effects?

Discussed below is a complete guide to eating watermelons. In this article, we will be discussing –

Watermelon act as an extremely potent antioxidant. Antioxidants prevent your skin from aging too quickly. There are two forms of aging that the human body and skin experiences – chronological and photo-aging. The first is natural and irreversible. Photo-aging is mainly caused due to the body suffering from oxidative stress. When your body is exposed to UV rays, your skin cells get damaged by these volatile UV-A and UV-B atoms. When these skin cells get further exposure to smoke, dirt, and other pollutants, the damage to the skin can be fairly severe. Your skin cells are guaranteed to collagen and elastin, which are essential proteins that make your skin elastic, durable, and radiant. The only way to tackle this loss is by supplementing your body with antioxidants. Red-fleshed watermelons are full of vitamin A which helps in avoiding skin infections and prevents aging of skin cells.

Watermelon is rich in vitamins C and E, which makes it an extremely potent antioxidant. These vitamins penetrate your skin cells easily since they are so lightweight. Consuming a combination of vitamins C and E are far more effective in boosting your skin cell growth as opposed to consuming fruits that only contain one or the other. Hence watermelon extract has always been a valuable constituent of most skincare products. Watermelon extract is also used as a natural moisturizer. It is a critical ingredient in most body lotions because of its anti-oxidative properties. Watermelons are also rich with vitamin B6, which boosts the natural nerve trails of your skin.

Watermelon is a lycopene-rich fruit. Lycopene is a powerful anti-inflammatory carotenoid. Watermelons not only contain lycopene (three times the amount found in tomatoes); these lycopene molecules are also bioavailable, which makes them active players in your body’s anti-inflammatory process. Lycopene is a natural antioxidant that boosts your skin’s vigor in its fighting against harmful UV atoms and pollutants.

Watermelon also contains Amino Acid Citrulline – vital amino acid that facilitates blood circulation in our bodies. When we consume watermelons, our bodies convert the Citrulline into Arginine, which facilitates a lot of our circulatory and immune system functions. Arginine is primarily a scavenger of radical elements present in the body. In addition to all of these nutrients, the high-water content of watermelons also helps in keeping the skin hydrated.

A common misconception is that watermelons hamper weight loss efforts since it is too sweet, when in fact the opposite is true. Watermelon consumption can help people wanting to lose weight because the calories in this fruit are far lesser than several other food items, including other fruits (per volume).

Plus, the natural sugars present in watermelon help quench the body’s thirst for sugar intake. There are only 30 calories in every 100g of watermelon. The fruit also contains zero saturated fats.

Since watermelons are essentially 92% water and full of natural fibers, they take a long time to digest, giving the consumer a feeling of being full. A few servings are guaranteed to make you not feel hungry again for at least a couple of hours.

Regular watermelon consumption has been proven to decrease body mass, systolic blood pressure, and body mass index. Plus, watermelons serve as the ideal food item for people who participate in intense physical activities. Watermelons help the body heal after strenuous exercises. They are rich with the amino acid Citrulline. As mentioned before, the body converts this amino acid into Arginine, which acts as a relaxant for the blood vessels, improving our blood circulation. Citrulline also enhances vasodilation, which helps people suffering from short breath after heavy workout sessions. Since Watermelons are the only food source containing such massive amounts of Citrulline, the amino acid was actually named after, ‘Citrullus lanatus’, which is the Latin term for watermelons.

Overall, people who are looking to lose or control weight during the summer must definitely include watermelons in their diet as it will naturally help them restrict the intake of other calorie-heavy food items.

Watermelons are frequently recommended by doctors to pregnant women during pregnancy. Apart from being a naturally cooling and soothing food item for the stomach, watermelons also help curb digestive problems that pregnant women commonly suffer from, such as acidity and heartburn.

In addition to all of these benefits, the minerals and vitamins present in these fruits also promote the health of the unborn child.

Despite all of its health benefits, this fruit does come with its fair share of negatives. Some of them include –

Excessive watermelon consumption has also been linked with diarrhea, stomach pains, and other digestive complications, which will be discussed in this next section.

Can Watermelon Cause a Stomach Pain?

Watermelons, when consumed in moderation, can be a fantastic source of dietary fibers, vitamins, minerals, and of course, water. However, overconsumption imbalances the digestive balance of the body, causing conditions such as diarrhea, stomach bloating, flatulence, and gastric issues. The fruit is rich with a sugar compound called ‘sorbitol.’ Sorbitol is known for loosening up stools. Although this function is typically good for digestion, overeating can cause severe gas issues. Hence, a lot of people complain about stomach aches after eating too much watermelon. Plus, a lot of people may have allergies to lycopene or some other contents of the fruit, which may cause stomach aches.

Although chilled or icy watermelon is exceptionally delicious, especially during the summertime, experts don’t recommend the consumption of iced watermelon. The nutritional qualities of watermelons get severely lowered when it is iced as opposed to when it is stored in room temperatures.

Extensive refrigeration of watermelons facilitates the rapid formation of ice crystals. These ice crystals may seem innocent at first, but they can cause severe toothache, damage to the throat, and other similar adverse reactions. Iced watermelon, when consumed directly, is akin to swallowing ice cubes as watermelons are 92% water. These cold pieces of fruit can severely damage the spleen and block the intestinal tracts, causing stomach aches, loss of appetite, indigestion, and other harmful conditions.

Despite being an extremely healthy source of water and various forms of nutrients, watermelons belong to the category of “raw food.” Eating an excessive amount of raw food is not recommended so it’s not good to eat too much watermelon. Excessive raw food intake is commonly associated with reduced appetite, reduced gastrointestinal strength (makes you more prone to gas related problems), and frequent indigestion. All of these conditions, when amassed, can cause severe problems such as abdominal distension and bouts of diarrhea.

If you are an occasional consumer of watermelons, you won’t have to worry about these problems. However, if you plan to have watermelons on a regular basis, make sure to consume it in moderation. Also, avoid iced watermelon at all costs. Apart from containing far fewer nutrients, iced watermelons can also give you a sore throat.

If you plan to consume only melons in your effort to lose weight, you will mainly see a loss in your muscle weight. It is imperative to consume other fruits in addition to watermelons to make sure your body doesn’t suffer from a nutrient loss. Watermelons don’t contain any proteins. So, overeating watermelons will not only make you feel full throughout the day, but it will also cause your body to suffer from insufficient protein intake. Whenever you are planning a weight loss diet, it is vital that you mix up your vegetable and fruit items. Consider taking the advice of a nutritionist who will be able to recommend a healthy amount based on your body.

Overeating watermelons can also cause an imbalance in your blood sugar levels. Even though the sugar in watermelons is completely natural, having excessive amounts of sorbitol and another sugar compound in your bloodstream is still extremely unhealthy. If you suffer from conditions such as diabetes or hyperkalemia, don’t eat watermelons without the advice of a doctor.

Like all good things in life, watermelons too need moderate consumption. With the help of this guide, you will be able to fine-tune your watermelon intake in such a way that you can still enjoy its benefits while steering clear of the negatives overeating the fruit.